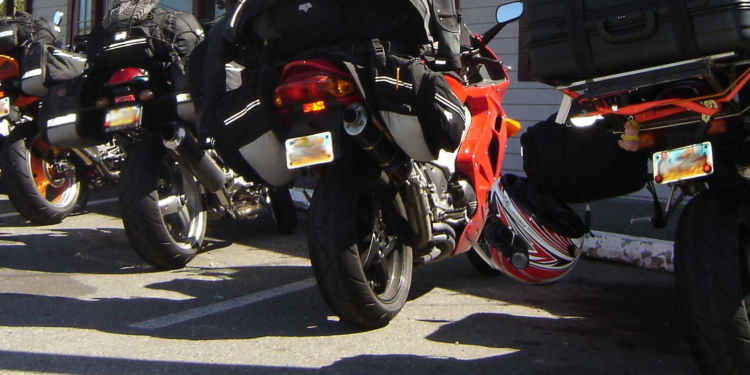 I must admit a level of trepidation over testing a set of Continental motorcycle tires. In the past, my only context with Continental tires had to do with London motorcycle messengers choosing them because they wear like iron. However, I was given reassurance such as “they are one of the top selling tires in Europe ” and “They are rumored to grip like Pilot Powers and last like Pilot Roads”. Both statements worked to calm my anxieties. After all, it’s not like Continental is new to the tire business. And the Road Attack was recently named as the official tire for the new BMW’s…

I was given a quick briefing about the structure of these German made tires. They use a similar construction as Metzelers, but instead of just coiled steel belts wrapping the carcass, these tires use braided belts which supposedly prevent the tire from deforming during cornering and acceleration. This results in the rear tire providing a larger footprint than traditional tires, thereby giving more grip. Also, less deformation means the tire builds up less heat, and a softer/grippier rubber compound can be used. I was advised, however, that the tires should be run at higher air-pressures than what we have become accustomed to. I was advised to run 41-42 in the rear and 35-36 in the front.

The tires have a few cool features about them, besides just the really cool tread pattern. All the sidewall writing is up-side-down from traditional tires, and there is a cool, wavy checkered flag pattern that wraps the sidewall.

Unlike many motorcycle tire tests, where the magazine guys run a few laps around a track then give their impression, out test was a run-em’ to the nubs sort of test where we’d see how they behaved over a long period of time and, hopefully, over a plethora of riding conditions.

Two rear tires later (and one front at about the end of its usefulness) I feel that we have a very fair report about how these tires behave. Additionally, because we have worn out a lot of the competitor’s tires, I feel safe making some generalized comparisons. However, be warned that actual mileage may vary.

First, I had an initial hard time getting used to the profile of the tire. They are different from anything I had run before. The tire tips in really quickly, but then the more you lean, the slower they tip in. This was weird at first, but after a few thousand miles on them, I don’t want to go back. It is the unique profile of these tires that makes them shine. Extremely stable while going straight, similar to a Metzeler, really quick and light on the initial turn in, very similar to a Pilot Sport, but progressively more stable and planted as lean angles increase. I found this to inspire additional confidence.

Kris’ Z1000 and the Speed Triple both call for 190 width rear tires (somewhat controversial because many feel that 190 tires have slow turn in) I can assure any rider that slow turn-in is not a problem. Much to my delight, I’ve yet to lean the bike all the way to the edge of the tire; a very comforting fact after riding other tires where I’d feather the edges going to the gas station. The rear tire also seems to exhibit the same light and planted turn in feel common in the smaller 180 width tires. This is a huge improvement from what I would describe as the lethargic feeling Pilot Roads.

Additionally, they are very communicative tires, which may be a love or hate characteristic depending on the rider. Where the Pilot Roads are almost numb by comparison, the Road Attacks communicate every weird road surface to the rider. I feel like I know exactly what’s going on. The Pilot Roads are kind of an “ignorance is bliss” kind of tire where nothing is felt until the tire starts to slide. The Conti’s are a “knowledge is power” sensation.

Unlike Bridgestones, (also known for a stiff carcass) the Conti’s do not sacrifice ride. The Bridgestones I’ve ridden tend to provide a very harsh ride where even the smallest bumps are felt all the way to my fillings. I suspect because the Conti’s use a zero-degree belt, just like Pilot Roads, Metzelers and Pirelli’s, the tires provide a very predictable yet smooth ride. The tires have never had a jarring sensation like the Bridgestone BT020’s and BT010’s.

But all this is moot if the tire does not inspire confidence in the ability to grip the road. The Conti’s excel, well beyond my highest expectations. While I’ve never run Pilot Powers, I do not feel qualified to make a straight comparison, but I have worn out a few sets of Sportec M1’s and I can safely say that the grip is comparable to the Sportec’s. They feel like they will stick to the ceiling.

Wet road grip was another concern, but we’ve run these tires on moist coastal roads, through torrential down-pours, through fog across the desert, in the freezing cold morning and in the mid-day heat. They have only once, in over 8000 miles slipped on me. And that slip took place when I was accelerating hard in a heavy rain-storm over a fresh stripe of paint; and what tire wouldn’t slip in that situation?

Even after two road trips (two separate rear tires) the Conti’s were reluctant to show a flat spot in the center of the tire. While you could certainly see that they were wearing more down the middle, the tire kept is shape. I’ve never ridden a tire over as much flat, straight road as these two Conti’s and I’m thrilled with how much mileage I’ve gotten out of them, particularly when I think of how well they grip. The rear tire looks like it will last about 6000-7000 miles (where the Pilot Roads were lasting me around 5000).

The Road Attack front tire has worn, almost, too well. The “Conti Attack” text is still readable down the center of the front tire, although the sides are rubbed down to the wear bars. Tires do not generate as much heat when traveling straight, so I can only assume this is the reason, but it makes me think that a Conti Sport Attack front tire would be a better option.

I must say though, the more I ride on these tires, the more I like them. The more I get accustomed to what the tire is telling me, the better I feel about throwing into a corner, or holding back a bit and they are tires that I’ll happily plunk down my own stack of George Washington’s for.

I would go so far as to say these are the finest road tires I’ve run (I’ve even had them out for a couple of track days!). In fact, I purchased a set and threw them on Kris’ new Z1000. And based on my recommend, three other people have installed sets, that I know of, and have reported the same very positive comments about the tire.

The lower price tag also makes you feel better about just riding the bike. A 190 Pilot Road retails for over $200 while the same rear Conti’s retails at about $160! And in my opinion, the Conti is a better tire than the Pilot Road in almost every way! It grips better, handles better and lasts about the same as the Pilot Road. Find out more at www.conti-online.com.

Should You Work On Your Own Motorcycle