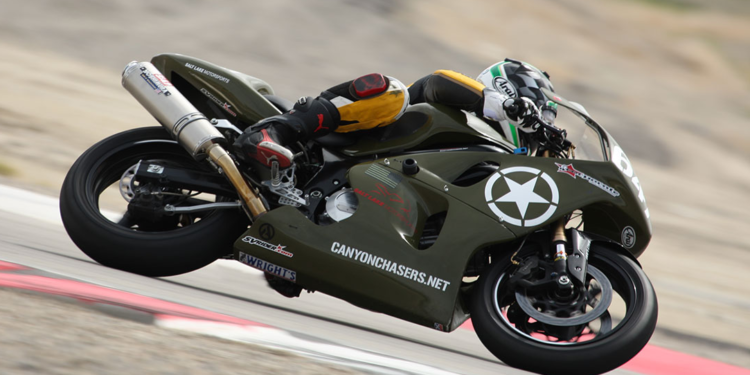 There is a lot more to a tire than all-out grip. Carcass construction, profile and a myriad of other factors all need to come together in order for a tire to have much value. Continental has proven its ability to make a good tire; their Road Attack, we feel, raised the bar for Sport-Touring/Road tires and the Sport Attack is probably one of the best street/sport tires available on the market. Conti has proven the ability to develop tires that last a long time without sacrificing grip or handling. Their weak spot has always been the ability to compete head-to-head with track-day/race tires.

The Race Attacks use a very similar construction to the rest of the “Attack” family. A similar tread pattern and the same zero-degree belt construction that they say provides greater feedback and stability when braking and accelerating out of corners. Conti claims that the front tire profile is revised from the Sport Attack and Road Attack to give a larger footprint at more extreme lean angles.

That stuff is all good and sounds like your typical magazine info, but the Race Attack was the first line of Conti tires to use what they call “Continuous Compound Technology”. Dual compounds are all the rage now. Harder compounds in the center and softer compounds on the edge are designed to make a tire more stable under hard acceleration while the softer compound gives more grip where you want it most; when the bike is heeled over. The problem with dual compounds is what happens at that transition between compounds. Where do you put that transition point? Many big brand tires have had problems when the transition of the rubber compound interferes with the belt construction.

Conti took the dual-compound concept one step farther with their Continuous Compound. As you’d imagine, it’s a single compound cured at different rates and temperatures across the profile of the tire. The result is the shoulder area is more flexible, proving more grip and the center of the tire is more wear resistant, but without any transition zone between the two. Continuous. Get it?

So how does that work?

We experienced an unseasonably cold spring and our first track days had us sitting in our cars between sessions with the heaters blowing full blast. As a result the riding wasn’t so good. Track temperatures were so low that they would leach any heat out of the tires and we found ourselves experiencing slips and slides throughout the track. After a series of left corners, we’d slip through the next righty. We really wanted to blame the tires but most everyone else was dealing with grip issues too so we waited for warmer weather.

When the heat finally arrived we found the tires to behave completely differently. They came up to temperature much quicker, as you would expect a street tire to do and the profile, handling and grip all heaped on lots of confidence. Despite the revised profiles the front tire still feels more like a street tire than a true race tire. The bike tipped in a bit slower and felt more stable during upright conditions, but not so much that we saw any drop in our normal lap times. In fact, we were so impressed that we decided to try a set during an endurance race.

When it came time for race conditions, meaning lap times about 10-12 seconds faster a lap than track day speeds, we all felt a sensation of slipping. Coming in and checking the tire, we didn’t see any heat tearing like we expected, in fact the tire wear looked near perfect. Even, smooth, no cupping or tearing. So we went out again, passing the bike between riders as we tried to figure out what was going on. Test rider Warren discovered what was happening. The tire wasn’t slipping but in fact the carcass was flexing more at the faster speeds. Once we knew what was going on, we felt more confident in tire, many Pirelli’s will behave the same way. So off we went again.

Near the end of the day after lots of laps and a full day of hot Utah sun beating down onto the track the tires started over-heating and tearing. This resulted in actual slipping and a couple of close calls when the front tire would push when trail-braking hard into corners. Remember, this is during race conditions.

If we didn’t experience it, we wouldn’t believe it. Every other tire of this genre that we’ve tried, we’ve been lucky to see anything more than 800 track miles out of a set. The Conti Race Attack Street, you’re not going to believe it, but after 1200 miles of hard track use they were finally wore enough on the edges that we thought it was time to retire them from track duty, but since they are a street tire, that still left ample amounts of tread remaining at the center of the tire.

As of this writing, the tires were repurposed for street use and we’d imagine they’ll provide another 1000 miles (or so) of street use before its time to send them to the rubber recycling center. That’s unheard of. For reference our Dunlop D209/211GP’s were destroyed after 800 miles, Michelin Pilot Races lasted us 650 miles and our new Michelin P1 race tires were gone after a mere 400 miles.

All of our testers came to the same conclusion; even though the word “Race” is in the name, these really should not be considered a “Race” tire. We found that the Race Attack Street performed and wore astonishingly well. During track-day speeds these tires were transparent and capable of anything we wanted to throw at them. When the pace exceeded track-day speeds and entered into dedicated race-pace the tires had a tendency to feel a bit vague or if inputs started to become sloppy and abrupt, we’d experience that same vague feeling that tended to cost us confidence.

We think this tire works best for track-day riders who are not out to prove anything and are more concerned with being the best rider than instead of worrying about being the fastest guy out there. We feel that this kind of rider will really appreciate the longevity, quick warm up and consistent feel, not to mention our favorite tire profile. And they wear very well without sacrificing traction or stability. Try a set and you’ll be amazed.