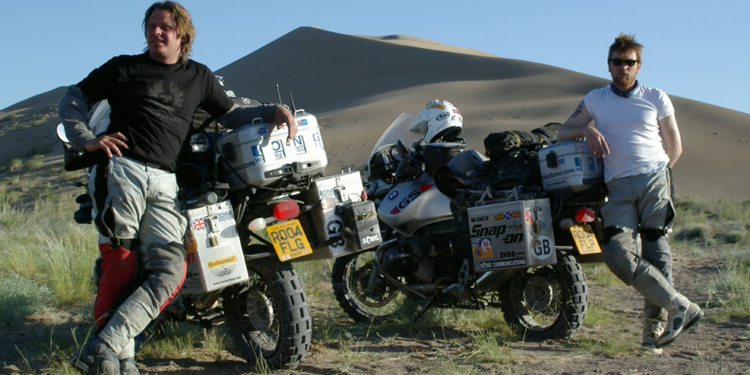 After reading the book, Long Way Round, documenting Ewan McGregor and Charlie Borman’s global circumnavigation, we here at corporate CanyonChasers [the wife and I] decided that we really wanted to see the television program. When Ewan and Charlie (we feel we’ve gotten to know them so well that we’re now on a first name basis)When Ewan and Charlie did their three months, 20,000 mile journey they took along a couple of chase vehicles, a couple of photographers and an extra GS1150 [Claudio!] to make a documentary of sorts. The cable network Bravo ran the five-part version of the series, but the complete 10-episode version is obviously better.

I had read the book and enjoyed it much more than I’d expected. But the DVD really shines! I felt like I really got to know Charley and Ewan during their adventures around the world and found myself watching episodes multiple times. These guys are really quite dynamic and fun to watch. True motorcyclists, (or Biker as you would say in England) and as such, they were very easy to relate to. Just wait to see the glee in their eyes when they get a digital torque wrench. They are true motor-heads!! They appear to be a couple of solid blokes that one could easily pal around with.

The first episode details them coming up with the idea and prepping for the trip. The two of them have an unusual obsession with burn-outs and “hoiking” wheelies, which makes them all the more endearing. The camera follows them as they search for a motorcycle sponsorship. KTM really dropped the ball with their lame treatment of the two actors. BMW should be commended for their support and willingness. If KTM treats two celebrities that way, I can’t imagine how they’d treat some lowly customer like myself. I’ll honestly have a hard time considering a KTM after watching the DVD.

By the end of the first episode, Ewan and Charley are on their way. From there on, the real adventure begins. One reason why the series likely didn’t gain the popularity it deserved is because of a lack of drama. Ewan and Charley get along quite well and have a strong friendship. There are no dysfunctional verbal attacks like the ones American Chopper is built upon. Instead these are two riding buddies that are out having a great time, missing their beloved wives and struggling through border crossings and an accident prone photographer on the third GS. The people they meet and the adventures they have is where the drama comes in. Anyone who has traveled by motorcycle knows this to be true anyway.

Its also very entertaining to learn with these guys. They start out quite inexperienced and slowly become more seasoned and expert at long-distance travel. So as viewers we get to endure the growing pains and learning proess with them as they break two frames on the bikes caused by overloading and destroy the ABS system on Claudio’s bike when they forget to disconnect the battery before welding on the frame. While some viewers could find this frustrating, watching them learn they way around made it that much better.

The highlight of the series is near the end of the program as they traverse Russia’s “Road of Bones” where conditions are so abysmal that they resort to piggy-backing, literally, on Russian transport trucks to cross spring run-off, swollen Russian rivers. Then they fly to Alaska and ride through areas familiar to us [Calgary!] on their way to a reunion with their families in New York.

The whole lot of CanyonChasers sat down and watched the series together. We laughed a lot – much more than I expected as I’d seen much of it before hand. It’s wildly entertaining, funny and quite poignant and touching in many places as they visit UNICEF centers and even a distressing encounter with a Russian bear.

Surprisingly, I found myself completely enthralled in their journey. It was well documented, although I felt that huge gaps had been left out for the sake of time – I got the sense that they could have easily produced 12, hour-long episodes, the seventh ‘bonus’ episode tries to capture the highlights from the cutting room floor. But I found myself wanting more. By the time they reached New York and crossed the George Washington Bridge into Manhattan, I was choked up with a feeling of accomplishment and saddened by it’s coming to an end. What an adventure it must have been…

I feel that I can safely say that Long Way Round is of the same entertainment caliber as Faster and On Any Sunday. While not racing related, it allowed for a vicarious journey that few of us will ever have the chance to make for real – a global circumnavigation. Just like Faster and On Any Sunday, Long Way Round captured my imagination and instead of dreaming of winning races, I found myself day-dreaming about my own world-wide journey.