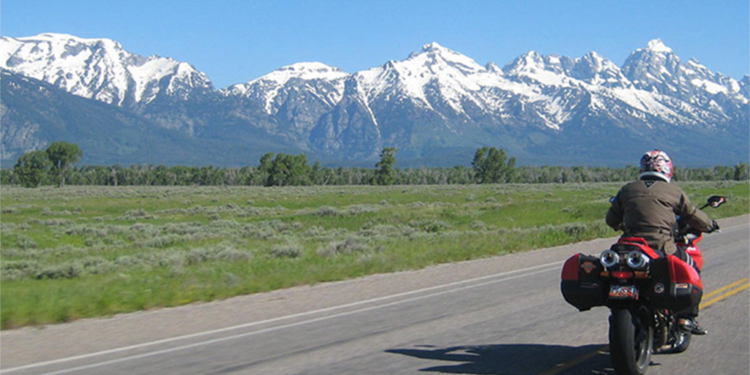 Sport Touring riders tend to be highly proficient riders (i.e. we like to go quick), yet we ride on a wide array of surfaces ranging from crumbling asphalt to pristine concrete and we ride in any kind of weather from bitter cold, torrential downpours to sweltering heat. But, at the same time, we Sport Touring riders need the tire to last long enough to get us there and back again.

In typical CanyonChasers fashion, we were not convinced by media marketing materials and wanted to see for ourselves and like we had with so many of the original Road Attacks, we wanted to ride them all the way into the wear bars.

When a motorcycle tire is manufactured they use a kind of chemical wax-like substance to release the tire from the mold. This coating, as you would imagine, offers very little grip when you put the tire into use, which is why you need to use caution with new tires, particularly in the wet. Continental has come up with a new method that bypasses this slippery new tire condition. They call it “Traction Skin”; a raw-tread surface that is the result of a new mold coating technology that eliminates the need for tire-releasing agents. Continental says this micro-roughness is a “revolutionary tactile tread surface” that optimizes the mechanical adhesion to the road. Basically, the tire doesn’t have that shiny black look like most tires, but instead the surface of the tire is covered with thousands of small bumps.

Dual compounds have become all the rage thanks to MotoGP. Now, pretty much everybody has a dual-compound tire, some even boasting three compounds. The idea is that you can place different compounds at different parts of the tire to get the behavior and performance you need. A harder, more durable rubber in the center to increase straight-line life and prevent the tire from deforming under hard-upright acceleration, and softer, more pliable rubber on the edges for cornering. The problem with multi-compound tires is the transition. One major tire manufacturer has even had to recall thousands of their tires because of problems with the compounds separating. Continental came up with what they call the “Continuous Compound Technology”; it’s one of the things they’ve learned from racing and is nothing new if you are familiar with Continental.

To summarize, it is a single compound tire that is cured using a unique controlled environment that applies different temperatures across the tire so that the center is wear resistant for greater mileage and the shoulder has increased grip, but without any seams or joints.

Finally, Conti continues to use their “Black Chili Compound” which is essentially a black carbon-silica combination that they’ve patented as ASC (Activated Silica Compound). It uses a mix of “Grip Resins”, “High Structured Racing Carbon Black”, and “Activated Silica Compound”. They claim it results in quicker warm-up times, shortened braking distances and excellent wet-weather grip. Conti has been using this for several years in their motorcycle and bicycle tires, making their bicycle tires one of the most popular on the market as well.

We’ve never shied away from saying that we loved the Continental tire profile, unabashedly calling it our favorite profile. Initially a really light, quick tip-in/turn-in, becoming progressively slower as the bike leaned. However, the Road Attack 2 seems to have dialed this back a little bit compared to the predecessor. The tip in is a little bit slower but still becoming progressively slower as the bike leans. We were a little disappointed to see this changed at all, but the more we thought about it, the more it made sense. On larger, heavier sport touring bikes, such as the FJR and the ST13, that super-quick tip-in can be a bit unnerving. We suspect that taking the edge off of that initial tip-in will make riders of larger Sport-Tourers quite happy, because it really enhances the sensation of stability.

Aside from the slight revision in the profile, the tire handles, in every way, better than the old Road Attack. Under braking the tire provided excellent feedback, particularly in trail-braking settings. Conti appears to have gone with a slightly more compliant carcass than the older Road Attack, where the old Road Attack would sometimes feel jittery or nervous trail-braking the 2 behaved more like a high-performance tire with it’s feel and compliance.

Cornering feel was excellent, again, improved from the original Road Attack. The more compliant carcass allowed the tire to track mid-corner bumps with ease, but without ever feeling wallowy or vague like many soft-carcass tires can. Additionally, the tire behaved, again, like a race tire when it came time to go to the throttle on corner exits. The tire was so predictable and precise that we found ourselves really gassing it out of corners, which I’m quite sure didn’t add to the tires longevity, but certainly increased the enjoyment factor.

The more compliant carcass also made the tire much more confidence inspiring on multiple surfaces. It always felt like the tire was really conforming and grabbing onto the road surface, resulting in excellent levels of confidence (and greater levels of forward velocity). The tire even managed to hang onto paint lines with a level of tenacity we’ve never experienced before.

When the rain came down, the Road Attack 2’s didn’t miss a beat. The hot phrase these days in motorcycle tires is “land-to-sea ratio”. So when the tire is straight upright, 0 to 5-degrees of lean, the rear tire has no siping or cuts – more land, less sea, but as the tire leans towards 15 to 20-degrees, there is a lot more siping – upwards of 15% sea to land or so. The siping speeds up warm up time (tires flex most at the sipes) and improves drainage. Then as the tire leans more towards its maximum angles, the siping decreases to around 3% or so for better grip.

Cold weather and warm up were never an issue for us, but we should be fair and say that we really don’t enjoy riding in ultra-cold temperatures (so we don’t do it very often) and when we do, we tend to take it really easy anyway and allow for plenty of time for things to warm up.

One feature of any tire that will have us stomping mad is when grip fades as the tire ages. We think this is unacceptable, but is the norm with some manufacturers. What tends to happen with tires like this is they’ll stick to the ceiling when new, but slowly bake-out and become hard and brittle and slippery, but the rider always remembers how awesome they were when they were new and will tend to go back and buy the same tire or brand again. We feel that a good tire needs to maintain consistent levels of grip throughout the life of the tire, even if that grip is slightly less than what it could be when the tire is brand-new.

The Road Attack 2 did much better than the average tire in this regard and showed a marked improvement over the original Road Attack. There was some baking and loss of grip as the tire aged, but it was fairly minimal and only really noticeable when we pushed or looked for those losses. This is one of the bigger safety features of a tire in our opinion, and the Road Attack 2’s consistency and improvement is a very endearing trait, helping us to have faith in the tire’s abilities no matter what the road may put in our paths.

We are sad to say that Contis new Hyper-Sport-Touring Road Attack 2 did not dethrone our current high-mileage leading tire, one lasting us just over 3,000 miles and the other set lasting almost to 3,500 (See our Tire Mileage Chart) but they certainly held their own against the competition outlasting the Pirelli Angel ST and coming in at about the same lifespan as the Dunlop RoadSmart and Pirelli Rosso II. Keep in mind that there is no perfect tire in the world. Every set of buns you put on your bike are a compromise – mostly a compromise between grip and life. While the Road Attack 2 did not last longer than the current high-mileage king, it certainly offered better handling and grip. We also put a very high premium on consistent levels of grip throughout the life of the tire. Tires that tend to bake out and become hard easily provide more miles, but by compromising the ability to stick to the road.

Additionally, the continuous compound helped the tire to wear at an even rate, never flat-spotting in the center, always keeping a rounded profile.

The other criticism of the tire life is the sipe-less center line of the rear tire. We fully understand the traction and wear benefits of having solid rubber down the center of the rear tire, but it makes it almost impossible to measure wear on the part of the tire that wears out first. We really wish Conti would put a few dots down the center of the tire (the same thing used on slick race tires), that way when the dots wore away, we’d know the tire was at the end of it’s service life, saving us from embarking on a day ride or weekend trip with a tire that’s not up to the task.

We’ve never hidden the fact that we love Continental Tires. Not only are they like a David in a sea of Goliaths, but they produce an outstanding product. One that beats the bigger companies in head to head competitions. The original Road Attack stood out as the standard by which we measured all other sport touring tires, and the Road Attack 2 seems to have combined everything we loved about the original Road Attack, yet they’ve managed to add in the grip of the Sport Attack while improving overall handling.

While most of the other motorcycle tire manufacturers still seem to put the majority of their efforts into racing, we love that Continental is focused primarily on the street rider. What makes a brilliant race tire doesn’t make a brilliant sport touring tire. Continental seems to understand this and has managed to make some of the best road-going tires we’ve ever sampled (and we sample a lot of tires) and with the Road Attack 2, they’ve managed to make that road-going tire even better.

We would like it if the Road Attack 2 could be our high-mileage champion yet still maintain it’s current handling and grip characteristics. Conti told us that if you need higher milage, (with slightly less grip) you can fit the GT version of Road Attack 2. The GT Road Attack 2 is intended for heavier Sport Touring machines. But as the standard Road Attack 2 sits we still feel this is one of the best tires you can put on your bike.