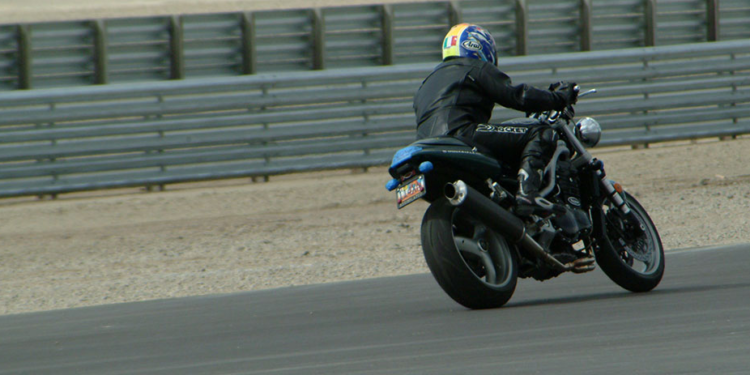 I was serving overseas when the move Twister, starring Helen Hunt and Bill Paxton came to theaters and as I prepared to come home it was the movie everyone was talking about.  “amazing special effects” and “compelling characters” and “engrossing plot-line” were all used to describe the film.  I couldn’t wait!  I wasn’t back in the U.S. of A. for a full 24 hours before I found myself in the theater, bucket-o-popcorn in my lap and gallon of soda pop in my hand, living the American dream again.  But I thought the movie sucked.  It was cheesy, predictable and kinda’ childish.  Well, at least in my eyes.  So much had been said about the film that I was disappointed when the film didn’t deliver to my expectations.

And so it goes with the Michelin Pilot Power motorcycle tire.  This extremely popular tire has been on the market for a few years now, and since they come as standard equipment on many new bikes sitting on showroom floors, just about everybody has had the opportunity to run a set.  So when we finally got our chance, we were initially a bit disappointed.

First, we took them to the track. They seemed to have a pretty good profile.  They tipped in a bit quicker than I preferred but they never felt nervous or twitchy like the old Dunlop D207’s and D208’s. But they still took a little bit to warm up.  Once warm, however, they gripped wonderfully.  They also wore rapidly.  By the end of one day’s track time, there was noticeable wear on the sides of the tire and the wear bears were clearly in site.

But since we ride our bikes on the street, the next test was to take them commuting.  For such a task they performed quite well and came up to temperature quick enough to be trusted by the time I arrived at the onramp.  But because they are a “sport” tire, they continued to wear quickly in the center although we didn’t commute on the tire enough to develop a flat-spot.

Then we took them on the road for a three-day sport touring jaunt that would take us through the twistiest roads our fair state has to offer.  The tires are confidence inspiring because they do not slip, as long as the road is dry.  Once it gets wet they start to feel a bit nervous when tipped in.  But the added confidence increased forward velocities as we rallied along our favorite canyon roads.  It was here that the true failing of the Pilot Powers was revealed.  The tire feels unstable when leaned over on top of pavement irregularities; particularly seams or grooves running parallel with the direction of travel.  So severe is the sensation, that the first time I experienced it, I stopped and checked tire-pressure.

As long as the road was smooth, i.e. racetrack smooth, the tires performed beautifully!  They warmed up better during street applications, but this is likely due to the greater frequency of slowing and accelerating that occurs when dealing with traffic or getting out of the neighborhood.  However, the nervousness over pavement irregularities grew to be irritating because it became difficult to tell if the tire was starting to slip a little or just being overly reactive to a crease in the tarmac.

Another disappointment in the tire was the lifespan.  And this could be caused, once again, by unrealistic expectations and stories of people racking op three to four-thousand miles on them, but by 1800 miles we were down to wear-bars from edge to edge on the rear tire – and that was running the recommended rear tire street pressure of 42psi! (32psi.on the track).

When I walked out of Twister that balmy summer night, I was disappointed and wished I’d spent my time and money doing something else. Similarly, the Michelin Pilot Powers left me with the same sensation. The nervousness and the short lifespan made feel as though my money and time would have been better invested elsewhere. At least they wore evenly.