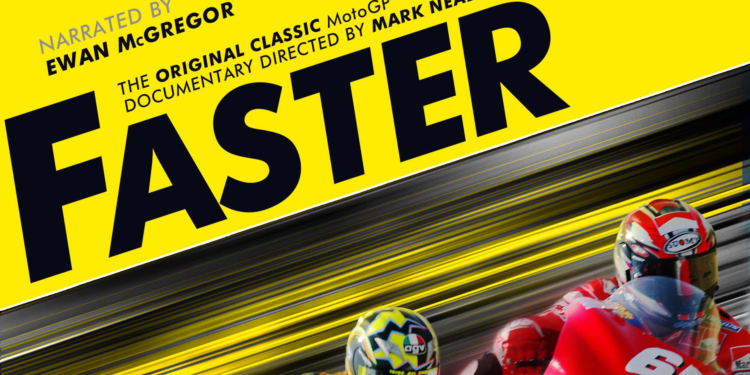 The best modern motorcycle film just got better with the release of The Ultimate Collectors Edition DVD ($34.95) of Faster, Faster and Faster and The Doctor, the Tornado and the Kentucky Kid. The full monte collection comes with four DVD’s cram packed with even more great MotoGP stuff.

If you haven’t seen Mark Neale’s Faster, Faster and Faster and The Doctor, the Tornado and the Kentucky Kid, then we will assume that you are A)New to motorcycling and need to purchase these right now, or B) Have been living under a rock and need to purchase these DVD’s right now. Why? Well, Duh! These are the finest motorcycle stories put to film since Bruce Brown’s On Any Sunday documentary from the early 70’s. And just like On Any Sunday, these DVD’s belong in your personal collection (Along with “The Great Escape” and “Worlds Fastest Indian” to name a few.)

Starting off with Faster, with the Ultimate Collection you get the Directors Cut of the film that includes fourteen (14) new scenes plus it has been remastered in 5.1 Surround Sound. (Our older version of Faster was only in two-channel stereo). Now you can really scare the dog with even more channels of V-five glory spinning at full tick. The DVD set also has unseen interviews with Barry Sheene, Max Biaggi and Kevin Schwantz. Plust Wayne Rainey’s sotry of what he calls “his greatest grand prix victory”. Lastly, if you are interested in attractive young ladies hoding umbrella’s, there is an homage to the MotoGP paddock girls.

You get Faster and Faster, (basically Faster 2, the sequel) and a bunch of what they are calling “interactive racing” where you can scroll between all the available camera angels from races with the “angle” button on your DVD player remote (I always wanted to use that angle button). We really enjoyed this little morsel because it allowed us to watch several laps of just Rossi’s hand, or the rear tire or whatever shot we wanted. Moto geeks like ourselves will be engrossed by this and we found ourselves spending as much time on the interactive racing as we did on the actual documentary.

On to DTK (The Doctor, the Tornado and the Kentucky Kid). Again, you get the Directors Cut of the film that includes eleven (11) new scenes also in 5.1 surround sound. New scenes give you interviews with the American stars on their return to the USA for the ’06 race, and highlights of Hayden’s victory at the second Red Bull USGP. Plus you also get the “interactive racing” for the entire Laguna Seca race. Again, this was one of our favorite features. All in all this adds up to more than 90 minutes of additional footage.

The ultimate DVD’s can be purchased individually or as a complete set. We opted for the complete set for seven total hours of motorcycle gluttony. We think that will be perfect for those long winter weekends when we can’t be riding.

Also, the producrs have done something else we thought was cool, and thats provide Faster via iTunes (just faster, not Faster and Faster or DTK). We’ll be the first to admit that we’ve put more than one movie on our Video iPods to watch while traveling or while dealing with those long hours of laborous TPS reports at our place of non-motorcycle employment.

Our final word on this is that everyone should own this “final, definitive” collection, You can visit iTunes for the Directors Cut of Faster or you can visit fastermovie.com. for the Ultimate 4-Disk Collectors Edition that comes with all three movies.