Into Africa by Sam Manicom 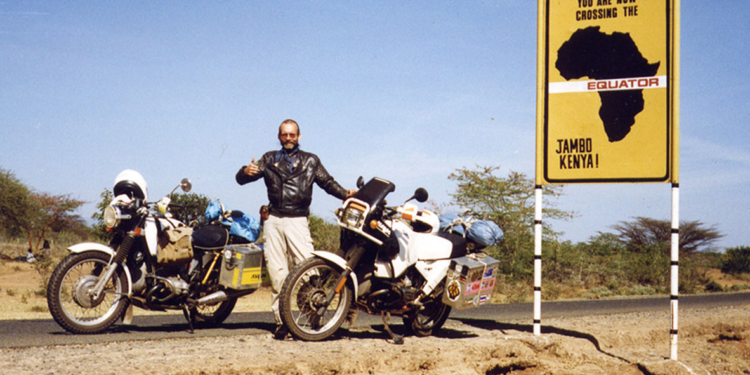 Into Africa takes off full blast into a crazy motorcycle adventure with nothing more than a short introduction describing Manicom’s decision to learn to ride a motorcycle, before he jumps head-first into riding into the throat of Africa. Within the first couple of pages, he ends up in an accident in Tanzania that leaves Manicom sitting in a jail cell and the pedestrian involved, literally, standing on one leg. Before the end of the second chapter, Sam finds himself in yet another accident, this time with a Fiat. One accident would deter many a motorcycle tourist – but two accidents within the first part of the journey?

Similar to Ewan and Charley’s adventures in Long Way Round, he soon found that he was on a big bike that was over-packed for the adventure at hand. Riding the overloaded and heavy motorcycle made traversing some of the roughe areas almost impossible. Manicom commonly ends his chapters, or adventures, with a statement about being alive and living the dream. It reminded me of a common CanyonChasers statement that the more miserable it is, the more fun it is to talk about later. But I found myself wondering when the fun would begin.

As the book continues with some eye-brow raising and at times illegal border crossings, Manicom finds himself holding somewhat of a celebrity status in Ethiopia. Manicom was informed that he and his travel mate were some of the first tourists to come to Gonder (or Gondar), Ethiopia since the war ended – and they were definitely the first to come on motorbikes in at least 20 years!

Throughout his journey I was most impressed with his tales of the locals. On a terrible road in incredible rain he consistently received help from the same small group of guys who would jump out of the back of a pickup into knee-deep mud to help out the motorcyclist – repeatedly, every time he fell. Or on an island in the middle of Lake Bunyonyi where Manicom stayed for nearly two months assisting an Aid group with some construction work. He befriended some amazing locals who had never encountered white people and were once terrified of the “white man”, but after a night in a bar drinking and laughing together they found that they had more in common than different.

I really appreciated what Sam called the “chameleon factor,” basically meaning to be adaptable; which is definitely a big part of motorcycle touring. No matter how well planned, things will not go as expected, and do you really want them to? Isn’t that why we ride to unusual places to get an adventure we wouldn’t ordinarily find in our mundane daily lives? Isn’t the unexpected the things we look back on with the greatest fondness?

Through his adventures and his sometimes too honest reporting, I found myself thinking that although I have always wanted to visit Africa, now I no longer wanted to go because of the harsh conditions Manicom faced. But by thee-quarters of the way through the book I already wanted more. His experiences changed from figuring things out as a newbie on a bike to living with a tribe that had never before had a visitor from the outside. All this caused me to want more and that “more” would only come from a first hand experience, ahh… maybe someday but until then onto his next book.

Into Africa is available from Aerostich and Bobs BMW in North America, with signed copies coming straight from the book website www.sam-manicom.com/orderform.htm.