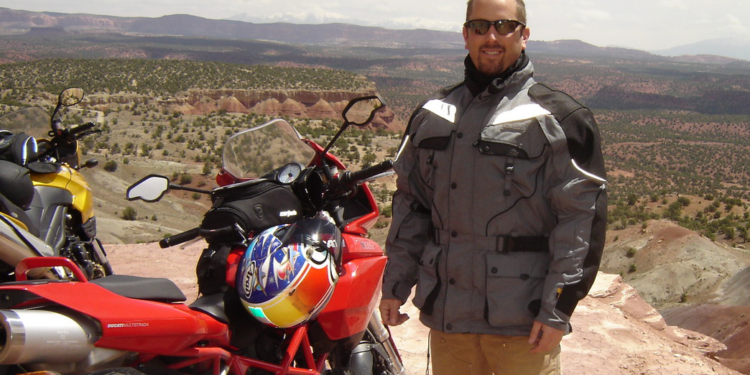 The joy and greatest challenge of touring is that you never know what you’re gonna’ get (no reference to a box of chocolates here). On one day it could be sunny and 72-degrees, and the next day it’ll be 30-degrees, wet and cold, the day after that it’ll be in the triple digits with face-melting humidity. For most of us, weeks on the road mean we only bring one riding jacket, so good ST gear needs to be able to work across that entire gamut.

Enter the Olympia AST. AST stands for All Seasons Touring, and it’s not the first riding jacket we’ve seen that claims to be the answer to your search for the perfect riding coat, and since the price tag is a bit lower than many of the competitors version of the same thing, its hard to imagine the jacket performs as promised.

First, Olympia is another relatively new motorcycle gear company, started by a husband and wife team who began their careers in the fashion industry, but a love of motorcycling and a feeling that a lot of motorcycle riding gear lacked either function or fashion, they saw a niche that they could fill.

For handling the rigors of touring, the jacket is full of nice details you’ll notice right away, neoprene around the collar, lots of exterior pockets all badged with a “waterproof” tag; lots of interior pockets, some touting to be designed for cell-phones and media players. To deal with having to layer for temperatures, there are several adjustment straps on arms, wrists, waste and hips in addition to a full-sleeve liner that can be zipped into the shell or worn on its own. For added visibility, retro-reflective material is liberally placed around the shoulders and back of the jacket.

A full complement of CE approved armor resides in all the standard places, shoulders, forearms, and back. The back armor is what they call “motion-flex”. Its articulated so it moves with human biomechanics better than solid foam pieces found in a lot of riding gear.

For dealing with the environment, the AST jacket has shoulder-to-wrist venting, with adjustable flaps that double as wind-scoops and reinforced, water-tight zippers all integrated into the arms, chest and back to help the jacket cope with everything you could encounter on your epic road adventure. The jacket also has a water resistant acrylic coating on the backside of the outer shell and a water-proof, breathable membrane is sewn in under the shell to repel the wettest of conditions.

Olympia is quick to point out that they only use Dupont Cordura® nylon for their gear because it’s two to fourteen times stronger than standard nylon, polyester, or cotton, claiming they’ve tested lower priced materials used by competitors but none come close to the abrasion and heat resistance of authentic Cordura. They say Dupont Cordura is worth the investment even though its price has doubled of the last few years. They say “it’s not about profit; it’s about quality, safety, and rider satisfaction.”

When we first tried on the jacket, we weren’t impressed. It felt bulky and cumbersome. We were really reluctant to actually wear and test the jacket because of its dowdy feel. So frumpy does the jacket feel, that we even opted to wear a leather jacket underneath rain gear to avoid wearing this thing. Putting it on, it feels like a heavy-weight parka and we’d feared we’d gotten the wrong size despite several test fittings with the size above and the size below the size Medium we settled on.

It took a very severe weather forecast and a firm commitment to be on a motorcycle to make us drag this off the hanger and take it for its first run. After about 30-seconds of riding the frumpy sensation evaporated and a jacket that felt so out of sorts in the garage suddenly started to make a lot more sense. A cut that felt bunchy and awkward when standing around now felt elegant and svelte when in the saddle with the hands on the handlebars. We’d feared that such a bulky coat would flap, billow and balloon in the wind, but it was doing none of this, and despite the velocities and cross-winds, the jacket felt as stable as a favorite snug leather coat.

Riding beneath dark, wet skies and through the weather on the cusp of freezing, the jacket was repelling the cold without having to resort to the heated vest. Then the clouds opened up and brought the rain down upon us, and then even more rain after that. Several hours of blasting through torrential conditions, the jacket managed to repel virtually every drop allowing the infiltration of only the minimum of dampness on the inside of the shell. The second line of defense, in the form of the liner, beat back the rest of the wet keeping me warm and toasty and dry. The water-tight zippers on the vents, as well as the dual-folding extra flap over the YKK main zipper and reinforced flaps over all the venting do a great job of sealing out the weather.

Then came the snow. Yes, snow. Again, without resorting to heated gear, the same water-resistance and thermo-protection kept me laughing into the face of all that Mother Nature was throwing at us. I will not hide the fact that I was seriously impressed, particularly because a similar test on a similar jacket of another, much more expensive brand had failed to perform half as well, leaving the wearing rider quite soggy, cold and a bit disappointed.

So we’ve proven the jacket is very capable when the conditions are brutally cold and wet. Surely such a jacket would flounder when the mercury climbed to the other end of the thermometer? When the heat of summer beat down upon us, I again became reluctant to wear the jacket resorting to mesh and perforations and lugging rain gear along with me. But another questionable forecast and a 10-day travel-log forced me to choose the grey parka once again.

Massive, wrist-to-shoulder arm vents and liberally sized chest vents fitted with adjustable wind-scoops big enough to be the envy of supercharger turners gulped in incredible amounts of air; far more than the two small exit vents could handle and the jacket ballooned up like a parachute, pulling the jacket off my back and choking the life out of me. I had found the flaw! In order to keep my airway open, I closed down the arm vents by half, adjusting the amount of air coming in to match how much air could escape out the back. What a silly design, I thought to myself. A feature designed to impress fastidious shoppers when the coat is on the showroom floor and nothing more.

But then I had the opportunity to ride another motorcycle; one with much more wind protection than my traditional mount and suddenly, the intelligence of the design made perfect sense to me. The huge air-vents that allowed for too much air to enter the jacket on my minimalist motorcycle now gulped in cool air from behind the massive windscreen I now sat behind keeping me much more comfortable. I cannot hide the fact that I was extremely impressed; a jacket that was designed to accommodate more than one style of motorcycle. It’s easy to close down vents that may be too big, but impossible to open vents that are too small.

When its hot, you are going to be hot. All the vents in the world don’t give a jacket air conditioning, but the fact that a jacket that is this waterproof and this warm has the ability to vent this much air makes it extremely flexible and really proves itself to be a, no-kidding, four-season riding coat.

As A Complete Package

This really is an extremely good riding jacket. Period. The fact that it was built around the need of the touring motorcyclist is evident in every feature and even some features that maybe don’t make sense at first. Gear that gets accessed often will soon find its way into the front pockets, and I fell head-over-heels in love with the massive pocket on the back of the coat, the perfect size for holding maps, my notebook, my watch-cap, and my buff neck wrap; keeping the items I go to most frequently close at hand without ever getting in the way of my riding or cluttering up my tank bag.

There is no question this jacket was designed by someone who actually rides motorcycles for long distances and has thought long and hard about what makes life easier on the road; like not having to pack a second jacket to wear around town or around the campfire because the liner works as one, or that vents can be adjusted while in motion, or that the collar can be sealed closed or sealed open depending on the current conditions, or the fact that pockets all seem to be in just the right place, or that the adjustable straps allow you to tweak the fit of the jacket depending on how much you are wearing at the time.

For a very reasonable MSRP of $299 we’ve found very few jackets that are as jam packed with well-thought out features, have the high quality workmanship (two seasons of hard use and this jacket looks as good as the day we took delivery) and the same performance under all conditions. If you are looking for a do-it-all motorcycle coat, look no further, we cannot give this coat higher praise, and we’ll be paying closer attention to the offerings of Olympia Moto Sports from now on.

The jacket is available in mens and womens sizes and three colors, gray/black, sand/black and radioactive-bumblebee yellow. For more information visit www.OlympiaMotoSports.com.

How to Remove and Replace a Front ...