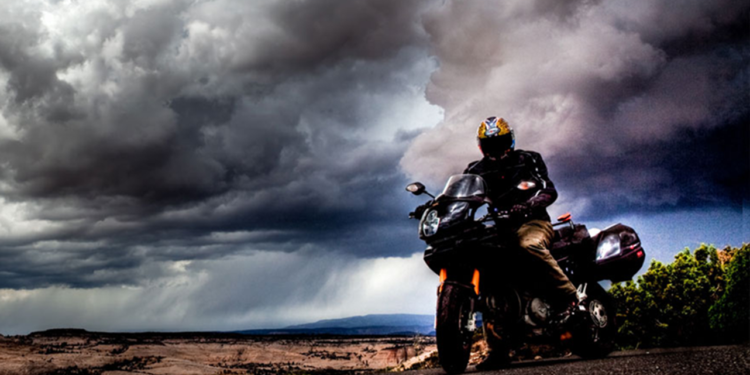 The first time I picked up a Suomy Spec 1R helmet at a local track day I was impressed. The graphics were beautiful the helmet was light and when I slipped one on I was shocked at how well it fit my particular noggin. My best guess is that my head is somewhere between the oval and round shapes typically used for helmet fit, and the Spec 1R fits better than any other lid I’ve pulled over my ears.

At the time I saw the price tag and slowly backed away from the vendor booth in the interest of preserving my credit rating. As with most upper-level helmets nowadays, the asking price can be a bit daunting ($649 for the “Extreme” graphics, $549 for “less extreme” graphics and $399 for solid colors). Having to go back to the helmet I was using at the time however was a bit of a letdown, to say the least. It felt like a concrete fishbowl full of cheap carpet.

It was the interweb that proved to be my bank accounts worst enemy. First, I visited the Suomy website. The excessive flash and obnoxious sound effects were super annoying…”Suomy, passion is life” What the hell is that?… but I was taken in with finding an extensive discussion of the safety features built into their helmets. After having read many an article and picked apart the different manufacturing and testing certifications used for helmets, I have come to believe that the BS 6658 Type A safety standard is the most desirable.

Opinions will vary on this subject and I encourage you to do your own research, but I was happy to learn that Suomy was using what I believe to be the higher standard. I left with a good impression of the company and its commitment to building a good lid. Then I started shopping around and found that, while still expensive, a Spec 1R could be had online for about 100 bucks less that the sticker price at the track day vendors. I had one on order before I could talk myself out of it.

Suomy says we should buy their helmet because they use a “triangulated fit” concept that they say applies gentle upward force to the lower jaw and forehead using three-density cheekpads that are denser than other helmets to prevent the helmet from changing how it fits as the helmet wears in. They also say rather than using older technology that takes advantage of multiple densities of impact absorbing liner, Suomy uses what they call Dynamically Variable Resistance Crush Zones. Crafting the liner from a single piece of high-strength uni-body EPS allows Suomy to “tune the energy management capabilities of the inner liner exactly where and how they wish the liner to act”. They combine their Dynamically Variable Resistance Crush Zones with what they call Structurally Enhanced Composite Fiber Weave technology that they say enhances the shells ability to radiate impact energy to the largest possible surface area. Of course, Sumoy doesn’t explain how any of this actually works. But it does sound really technical and impressive, and at the very least, it sounds as though they’ve put a lot of thought into making the helmet as safe as possible. We like that.

After having worn the Spec 1R in a wide variety of conditions for more than 10,000 miles over the course of a season, I can say that it is worth the money. It has broken in well, weathered heat and snow, been to the track as well as weeklong sport tours and handled it all without issue. Here is the basic rundown.

Its extremely lightweight compared to other helmets I’ve worn (1250-some grams). This proved to be a huge advantage on the last laps of a long track day, and last miles of a day of touring. The amount of fatigue was, in my opinion, considerably less than with my previous heavier helmet. Also of note is that Suomy is one of the few manufacturers using three different shell sizes for their helmets. The result is a more streamlined outfit, and less of that “fishbowl” feeling that you can get with a thick liner and a large shell if you happen to be of smaller skull persuasion. There are also some safety advantages to be had by using a more specific shell, which you can read about on the Suomy web site.

The graphics are sweet. There are no detectable blemishes or flaws that I can find. I went with the Bostrom Tattoo (skull) pattern. Of course you may have a different take, but as of this writing you have your choice of seven different graphic patterns and four solid colors in just the Spec 1R, so you should be able to find something that suits your taste.

The airflow is great in hot weather. This is one of the few helmets I’ve tried that I can actually feel flowing air, an outstanding feature for July track days. Incidentally not so desirable for early spring rides over mountain passes, as the ice cream headache phenomenon hit with a vengeance. But since the mercury is north of 90 for a good chunk of my riding season, Ill take the airflow. Also worth mentioning is where the airflow is not. I have had trouble with other helmets in the past where airflow under the chin guard has dried out my eyes and channeled a jet blast of allergens right into my sinuses. No bueno. The Spec 1Rs chin guard fits relatively close to my face, and has, for the most part, kept that from happening.

The face shield has held up well, stayed mostly fog free, and has better sun protection that I expected. While I did have some trouble with fogging, I’m not sure there is a visor in existence that would have fared much better. We were riding in some pretty extreme conditions, and even the Scorpion helmets (whose anti-fog I have found to be very good) were having issues. According to Suomy, their visors are treated with infra-red blocking coating. While I’m not sure if other manufacturers are using the same idea, the Spec 1R visor seemed to protect my eyes and face from the sun better than others.

It’s loud. This may be a trade-off with the light weight of the helmet. Even with earplugs, which I nearly always wear, the Suomy is loud. I admit though that I have gotten used to this, and it’s not entirely unpleasant. The sound is more of a low dull roaring and has gotten to me only on the longest of touring days.

The retention ring design. The Spec 1R uses a D ring retention system, which works well, with one exception. I may be getting a little picky here, but the snap for the free “tail” of webbing extends down below the chin. This proved to be an annoyance, as it would catch on the high collar of my touring jacket as I turned my head to look through corners. While it wasn’t a problem at the track with a more aggressive riding position and the lower collar on my track leathers, It was a source of some four-letter words when coupled with a more upright riding position and a higher collared jacket. Your mileage of course may vary.

After about six months of regular outdoor use, the paint and color on the side-pods are dulling enough to be noticeable. The white skull is turning a bit yellowish. This is something we noticed all the time on older AGV and Arai’s, but not so much anymore. Hopefully, Suomy will find a solution to this as well because its really too bad to see the paint aging too rapidly. Fortunately, if it gets bad enough or you just can’t handle it, you can order new side-pod covers for about $30 – $55 depending on the paint scheme.

Changing visors. It requires some kind of tool, whether that be the little orange guy supplied with the helmet, or a skinny slice of metal from your Leatherman. The little covers on the sides of the helmet took a fair amount of practice to master, and the plastic snaps that held the visor in place left me fumbling especially with cold hands. While the helmet is designed more for the race track, and there are advantages to the design (see the company web site), I was the last rider out of many a pit stop while touring because I was goofing with the visor change due to nightfall or weather changes. It got to the point where I would avoid changing the visor at almost any cost, and would simply wear one of my other helmets with a clear shield for cross town trips to bike night after dark.

The website is horrendous. Developed in flash; it’s overflowing with stupid sounds, bouncing text and a cumbersome interface. They do have good information, but it can be hard to get to. We wish they would at least give you the option of a non-flash site. One thing is for sure if you are going to visit the site while you are at work, be sure to turn your speakers off before hitting Suomy.com.

In living with this helmet over the last riding season I have found that the good features far outweigh the negatives. While I have never and don’t plan on crash testing it personally, I believe that Suomy has built a helmet capable of protecting my head. And its my opinion that trusting that your ridding gear will do what its supposed to is worth a premium in price. I would not hesitate to purchase another Suomy helmet, particularly for the racetrack.

For more information, turn off your speakers and visit Suomy.com.

How To Remove a Rear Wheel