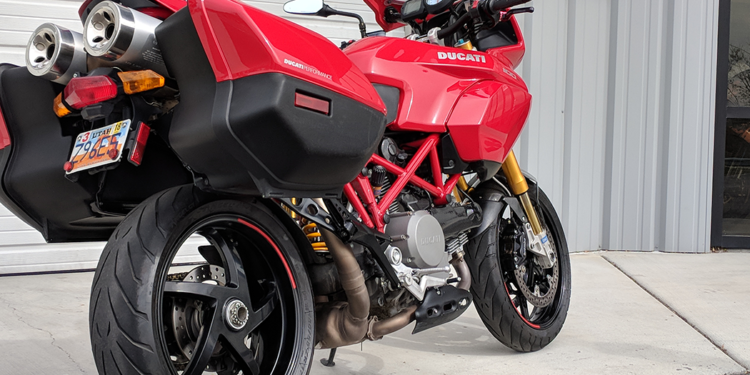 Why Pierre Terblanche decided the Multistrada did not need protection for the rear shock is beyond me. Leaving the precious rear suspension component exposed to road cheese and rocks flying off the top of the tire at speed double the bikes forward velocity was a serious oversight. I can only assume it was so overprotective new-bike owners (like myself) would plop down almost three bills to purchase the Ducati Performance hugger.

Looking through the catalog, the Ducati Performance hugger looked nice, but seeing one in person, it also proved to be quite flimsy with enough flex and flap to be disconcerting. Additionally, the Ducati Performance hugger neglected to follow the same shapes and lines offered by the OEM chainguard and I must admit that I found the OEM chainguard to be rather appealing. So, to say the least, I was not impressed with Ducati’s rear shock protective offering.

Originally, I wanted a simple plastic hugger. I didn’t feel the need for carbon fiber as I think it looks best in very limited amounts and I had no assumptions of saving a few fractions of an ounce to make the bike faster. I’d get greater weight savings from using the restroom right before my next ride. But alas, as far and as wide as I searched, only Carbon Fiber options were available and the price ranges were astonishing! The $270 price tag for the sanctioned Ducati component was bad enough, but you could really get stupid if one had more dollars than sense with some hugger options hitting just this side of $400 bones.

Asking for advice on Multistrada.Net I was advised to check out the Shift-Tech Carbon Fiber options, so I Googled my way to shift-tech.com to take a look see. The site is a bit kludgy and hard to navigate, but I was able to find what I was looking for easily enough. Instantly I thought the hugger was very attractive, largely because it follows the same lines and the OEM chainguard. It was also one of the more reasonably priced huggers coming in at $225. A quick phone call and it was on its way to CanyonChasers corporate headquarters.

It arrived a few days later in a very tatty looking Arai helmet box. The box’s weight had been matched by the weight of reinforcing tape circling the cardboard container, but inside the delicate carbon fiber hugger was meticulously packed in copious amounts of bubble wrap.

Once sitting on the counter I was immediately impressed by the quality and attention to detail. Every edge had been carefully smoothed out and I could find no flaw in the carbon fiber fabric encased in the pristine resin. The design was rather clever too. The shape and embossed edging reinforced the rigidity and strength of the hugger preventing undue flex or flap.

Installing the hugger was a breeze. All the needed hardware was included, even some specialized rubber bumpers that would prevent stress cracks at the mounting points. Only a few allen head bolts held the OEM chainguard in place, and a few rubber plugs needed to be plucked from the top of the swingarm to reveal threaded mounting points. The hugger slipped into place without fuss and all the mounting holes lined up with precision and no additional twisting to get things in place. Once on, the hugger looked stunning, following the lines of the bike far better than the Ducati Performance hugger.

The only issue I think the hugger will have is that it is not quite as protective as other options. The sub-fender paddle stops a bit shorter than I’d like and it looks as though fair bits of road cheese could still find their way onto the rear shock. However, after several weeks of riding the bike very little debris made its way onto the expensive suspension component.

The Multistrada, despite its motard inspired looks, is not a dirt bike, as such the Shift-Tech hugger would be quickly overwhelmed by heavy off-road use. But for street applications where the Ducati was intended to be used, the Shift-Tech hugger provides great looks, adequate protection and exceptional quality for a very competitive price.