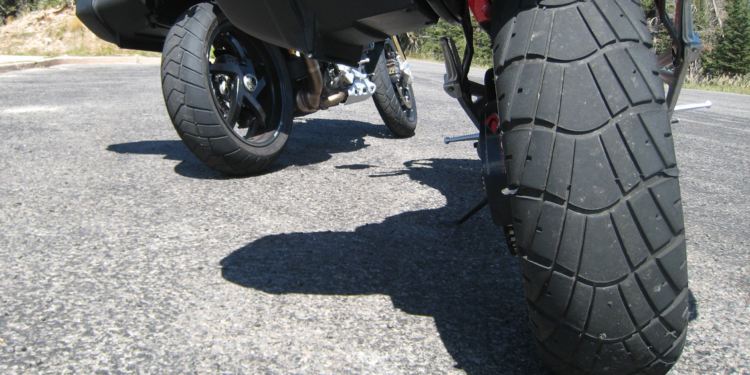 If you own one of the 17-inch shod quasi-dirt bikes, such as the Triumph Tiger 1050, Buell Ulysses or Ducati Multistrada, you probably want a tire that is a bit more capable of the occasional dirt road. I mean, if you have a bike that looks like it can tackle the occasional dirt road, it’s nice to think that your tire will also be capable – or at the very least, looks the part. Sure, there are scads of fantastic road and sport tires that we could choose from, but none of them look like they would be worth much on dirt roads that were in worse shape than perfectly graded and firmly tamped down.

So, you basically have two choices; the Pirelli Sync or the Dunlop D616. The Sync comes standard on the Ducati Multistrada while the D616 comes on the Buell Ulysses for the first model year. Subsequent years, the bike came with the Sync’s.

Dunlop places their D616 in their “High-Performance/Sport” catalog and claims the tire was derived from wet-track road racing tires, which isn’t hard to believe when just looking at the tread pattern. The front tire features “aramid-breaker tread reinforcement and radial-casing technology to provide excellent steering response and cornering stability.” While the brochure says the rear tire has “Jointless Band construction with Carcass Tension Control for enhanced cornering and wear performance, excellent high-speed stability and exceptional tire compliance.” If you can tell us exactly what that means, please let us know, because we have no idea.

Visit the Pirelli website and you’ll find the Sync listed under “Street” products, and like most every Pirelli/Metzeler tire, it is made with the 0-degree belt construction. Pirelli claims the tire will warm up quickly and perform well in the wet. It will also provide exceptional stability under high speed conditions, cornering and braking. Do some more reading and you’ll learn that the Sync was engineered specifically for the Ducati.

To test these tires, we did our old standard method of running them to the nubs. We compared two sets of the Dunlop’s with two sets of the Pirellis. See how long they lasted, how well they managed to deal with all the conditions we could throw at them during regular use and some intentional off-road riding (nothing too serious) and we used our Ducati Multistrada’s as our test bikes, but also spent some time on the Buell Ulysses with both tires as well.

Dunlop is pretty clear about the pressure they recommended us; 36psi front and 42psi rear. Pirelli was a bit vague. They said between 32 and 42 on the front and 36 and 42 on the rear. To make things fair, we ran both tires and 36/42. Interestingly, the Pirelli fitment guide did not recommend the Pirelli Sync for the Ducati Multistrada. Figure that one out.

Immediately, the Dunlop’s feel dramatically different than the Sync’s. The tire is instantly less neutral with a much more noticeable profile. The tires feel rock stable while riding in straight lines, and every bit as good while at full tilt. The problem lies with how the tire feels during gentle sweeping corners; during more relaxed cornering activities the tire feels skittish and wanders inexcusably. It feels as though the tire has a distinct shoulder and as long as you stay off of this “shoulder” the tire is fine. However, that just isn’t practical.

Out of three testers, I was the only rider who was able to come to terms with the D616 with one of our testers, Kris, saying it was the worst tire she’s ever tried since bias ply tires of yesteryear. It is worth mentioning that the D616 has one of the widest front tires we’ve ever seen and we wonder if this characteristic could be contributing the tires unusual feel.

While I felt supremely certain in the 616s with regards to their ability to grab and hang onto the tarmac, both the other testers were so distracted by the handling that it affected their confidence in the tires traction. Once again, I was the only one to get much out of these tires, and once I understood the tires tendency to wander I would just increase my speed to get the bike to lean more. Not so good if you are concerned about local law enforcement, but in my case it made for some great fun.

The multiple cuts and groves in the 616s don’t seem to allow the carcass to flex any more than most tires. In fact, they seemed to provide ample feedback – perhaps too much in some cases. But this feedback made trail-braking more fun because it was really easy to tell how much grip was available. The only problem was that all those extra cuts, as well as the stiff carcass, seemed to result in less heat buildup in the tire, taking them a bit longer than average to come to temperature. We’d hoped that this would equate to longer tire life, but such was not the case. Our rear tire was shagged to the wear bars after just 3,000 miles on one set and 3,400 miles on another.

Where I felt these tires absolutely shined was in the wet. Never before have I ever run a tire that has performed so brilliantly in wet weather. Dunlop claims the tire was designed after road-racing wet-weather slicks, and I have no doubt that they were. I found my speeds on wet roads to be much higher, with more confidence, than any other tire I’ve ever sampled.

So great was this tires performance in wet weather that it would be my first choice if I lived someplace other than the arid desert state of Utah. If we did the majority of our riding in the Pacific Northwest, where its expected to rain five out of every seven days, these would be my tire of choice, end of discussion.

Here, once again, the Dunlop trumped the Pirelli. The greater number of edges and blocks gave these tires much more traction when we turned away from the macadam. While we wouldn’t think of them as a great dirt tire, they were most certainly a decent one. They held predictably while braking and cornering, never once giving us any scares, and they could be spun with confidence when you wanted to bring the rear of the bike around. The carcass is stiffer than the Pirelli’s which makes them more suited to dealing with rocks and ruts. This also makes the 616 more capable of dealing with lower pressures without too much flexing.

Zero-Degree belt technology has been around for some time, and we’ve always liked the way tires featuring this construction handle. The Sync’s are no different, and the softer carcass conforms to the road and provides a very comfortable and confidence inspiring ride, even on bumpy asphalt roads. The tires are wonderfully neutral and do everything you expect a tire to do with no real surprises. But we come back to tire pressure once again. In the owner’s manual, Ducati recommends the Multistrada run with 32psi front and 35psi rear (putting the rear tire below Pirelli’s low pressure recommendation of 36psi).

When we increased the pressure to 36/42 we found that the tires behaved much better and the handling of the motorcycles actually improved. The front seemed to track better and the rear had less tendency to fold over during hard acceleration out of corners.

It took a lot to push the Pirelli’s to the point where you started to wonder about grip, but the handling characteristics were so neutral and so good that it could be done easily. As the tires aged the grip faded more than we would have liked. All tires become harder after lots of heat cycles and lots of miles, but the Pirelli’s would get to the point when the wear bars were about to rear their heads, that the rear tire could be drifted too easily around corners if we were heavy handed with the throttle.

One of the complaints we’ve read and heard about the Sync’s was that the front tire is too hard and does not provide as much feedback. When we moved to the 36/42 pressures the tires seemed to wear more evenly (we believe front and rear tires should wear out at the same rate) and overall felt like the front matched the rear tire better.

Like most other Pirelli/Metzelers we’ve run, warm up was never an issue. The tires came to temperature quickly; even once we started running the higher pressures. The higher pressures also resulted in much longer life. On our two sets we got 4,700 miles and 4,300 miles.

Wet grip was above average but could not compare to the Dunlop’s when dealing with hanging onto wet tarmac. Again, the extra blocks and cuts give the tires more edges to work with, and push through the water to get a handle on the ground. But again, when compared to the D616, there just was no comparison. Where we get very little rain, the Sync’s were just fine for us and we certainly have no complaints.

While the Sync’s did far better than you would think in the dirt, they could still be pushed beyond their limits with ease. The softer, more compliant carcass for street riding made the Sync much less able to deal with lower pressures, not to mention rocks and ruts associated with dirt roads. Even with our limited dirt testing the Sync’s would allow rocks to bang against the delicate aluminum rims with alarming regularity. We increased the pressure to prevent the dings, sacrificing a little bit of grip. The Dunlops did better in the dirt.

Its just like anything else, the better tire comes down to how you wish to ride. The D616 was superior to the Pirelli when it came to dirt roads, and we’ve never used such a fantastic wet-weather tire. But for more traditional riding on Tar Macadam, the Pirelli’s were the clear winner.

The Dunlops are quite a bit cheaper and can be found online for around $200 for a set (without shipping). The Pirelli Scorpion Syncs are about $50 more, but when we did the math, even with the higher price tag, the Pirelli’s were one cent cheaper per mile to use.

For us, we all concluded that we preferred the Sync’s overall. Dirt is much less important as we totally prefer riding on asphalt, but again, you never know when wanderlust is going to strike or if you find yourself in the middle of some major road construction. For us, the Sync was more than capable of handling such off-road excursions, and what it sacrificed in dirt and wet-weather performance, it more than made up for it with its excellent road manners and longer life expectancy – which, by all accounts, is where we spend the vast majority of our time.